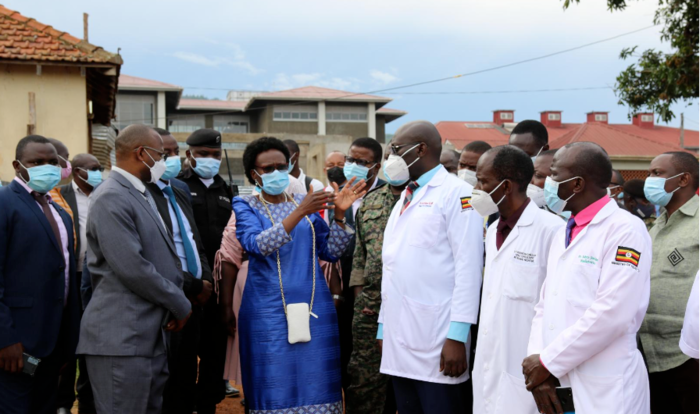 The leadership of the Ugandan Ministry of Health, the World Health Organization (WHO) and other health partners visited the Ebola affected areas of Mubende district on September 24 to assess the health situation, understand gaps and strengthen the response to the Ebola outbreak in the country.

The delegation was led by the Minister of Health, Hon. Dr. Jane Ruth Aceng, and accompanied by the WHO official, Dr. Bayo Fatunmbi, representatives from various health development organizations and implementing partners. , and three members of the Ugandan Parliament. .

Beginning with the National Task Force meeting at the Mubende District Town Hall, health development and implementing partners discussed the outbreak situation and engaged in their various capacities. to support the response. They stressed the need to strengthen community surveillance and risk communication as the basis of any response to the epidemic.

“Ebola is real, and we must eradicate this epidemic as soon as possible. The cases we already have in the country are sufficient and we cannot afford to lose any more. Let us all mobilize our technical, financial or operational resources to fight against the epidemic,” said Hon. Dr. Jane Ruth Aceng Acero, Minister of Health in Uganda.

“Since the start of this pandemic, the WHO has always stood by the government to prevent its spread. We have deployed our staff and mobilized operational resources in Mubende district to strengthen the response in case management, risk communication, infection prevention and control, community engagement and surveillance,” said the Dr Bayo Fatunmbi, WHO Group Leader for Communicable and Non-Communicable Diseases. Diseases.

The team then visited communities made up of community leaders, village health teams and other members to raise awareness of the outbreak and encourage them to get involved in the response.

“If you know someone with Ebola or who is a contact, please report it. Early diagnosis is very important to reduce the risk of death. I want to encourage village health teams to go door to door to identify people with signs and symptoms of Ebola,” added Dr Jane Ruth.

Health development partners also visited some possible centers in Madudu district where Ebola health centers can be set up for rapid response.

WHO has deployed its staff to support the response in the affected districts. The organization supported the training and deployment of Rapid Response Teams (RRTs) and provided Mubende Regional Referral Hospital with three Ebola kits to manage Ebola patients and save lives.

Several candidate vaccines against Sudan Ebola virus are in development. Experts will examine these vaccines and see if they can be used in Uganda. However, other health measures such as early detection, community engagement, patient isolation and early supportive care have been shown to save lives during similar outbreaks.

The public is encouraged to report all signs and symptoms of Ebola, including sudden onset of fever, headache, severe body weakness, muscle aches, sore throat, vomiting, bloody diarrhea or urine and bleeding through a bodily opening.

Gates Foundation pledges $1.27 billion in funding for health and development