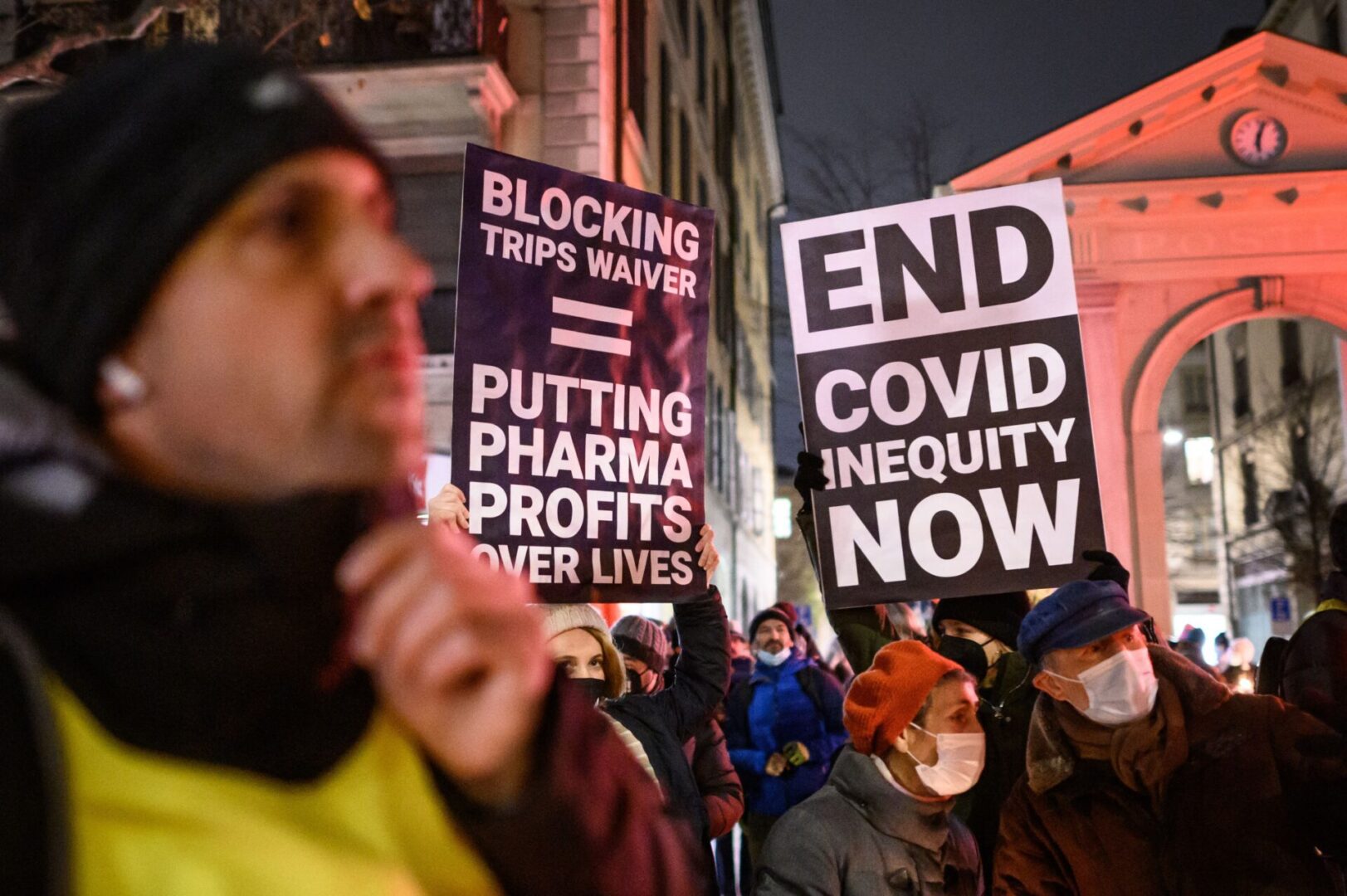 On the eve of the World Trade Organization (WTO) ministerial meeting, US health, human rights, consumer and development organizations denounced the WTO for failing to remove barriers to intellectual property who blocked timely access for billions of people to life-saving COVID-19 vaccines and treatments and the few wealthy countries doing Pharma bidding who blocked a COVID waiver from the WTO co-sponsored by 65 WTO member countries.

Today, only 14% of people in low-income countries are fully immunized. People in low- and middle-income countries have had to wait for vaccines, and once supplies started they were sporadic and too often delivered too close to their expiry date. In October 2022, India and South Africa tabled a proposal at the WTO that would temporarily waive the Agreement on Trade-Related Aspects of Intellectual Property (TRIPS) to allow low- and middle-income countries to produce their own vaccines, tests and generic tests against COVID-19. treatments.

Akshaya Kumar, Director of Crisis Advocacy, Human Rights Watch: “The pandemic and its cascading devastating effects on human rights are not over. Governments cannot just turn the page on this; they must find a fair and lasting solution. In Geneva, as ministerial conferences open on Sunday, it has been heartbreaking to learn of the green room tactics being used to heavily weaponize southern countries in a deal that, frankly, would not improve anything. Given their history, governments like the US, but also the UK, Switzerland and EU members have a particular human rights responsibility to alleviate the global inequalities that further entrench the harmful legacy of colonial-era racial hierarchies. Instead, they do the opposite. At HRW, we have consistently urged governments to make decisions at the WTO that are consistent with their international human rights obligations. This deal does not meet that standard. We believe governments have a duty to avoid unreasonably high costs and barriers to accessing essential medicines, tests, treatments and vaccines. What is proposed at the WTO is a poison pill. In our opinion, it would be better to leave.

Abby Maxman, President and CEO, Oxfam America: “In the 20 months since the start of WTO talks on the intellectual property waiver, nearly 30,000 people have died from COVID each day. And with each day that continues to pass, there is more death, more preventable suffering. The donation model does not work. Voluntary corporate measures have generated staggering profits, but fail to address persistent vaccine inequities, new waves and new variants, unreliable and insufficient donations. It’s time for the United States to step up and deliver on the commitment to support the current TRIPS waiver, which could help ensure more equitable and sustainable supply and access to vaccines, treatments and tests. COVID-19 for all. It’s time to put people before profits…. We cheered as President Biden joined leaders from 100 other countries supporting the vaccine proposal. But there has been little progress since. The United States apparently did not lead the negotiations, and the United Kingdom, Switzerland and the EU actually blocked progress. Worse still, countries are now being asked to consider a dangerous and limited proposal that is not a waiver, could add more hurdles preventing poorer countries from producing vaccines, does not include tests or treatments and does not have a sufficiently global reach. And without waivers, the hoarding of vaccines by rich countries is likely to be repeated with the next generation of vaccines and treatments. »

Paul O’Brien, Executive Director, Amnesty International USA: ‘When President Biden became president, he didn’t say he would put pharmaceutical profits at the center of his foreign policy, he said he would put human rights at the center of his foreign policy. That now means acknowledging that this deal is too little too late and continuing to negotiate until it has a truly human rights-based set of agreements that provide equal access to all COVID-19 health to all who need it so that we can bring this pandemic to an end…. Because this agreement applies to vaccines, not drugs and diagnostic treatments available immediately, it is too little too late. Because the proposal does not address barriers to technology transfer that would allow countries to manufacture adequate vaccines, it is too little too late. Because it only applies to certain countries and would leave out so many countries that are far behind in vaccination efforts and more drastically affect groups within those countries disproportionately affected by the pandemic , it is too little too late.

Asia Russell, Executive Director, Health GAP: “What we see today is an untenable, unacceptable text, presented by the leaders of the WTO and endorsed by a minority of its most powerful members. We call on the majority of WTO Member States to do what is difficult but necessary, which is to say enough and walk away. Truly, in an unprecedented pandemic, no deal is much better, infinitely better than a bad deal. The stakes could not be higher for the majority of the world’s population, which approves of a genuine waiver of the intellectual property rights provisions proposed by the WTO. We need them to lead in the absence of leadership from the Biden administration, European members, the UK and the WTO itself, who seem more interested in a cynical game of spin and pleas for its own relevance rather than the very real life and death issues communities across sub-Saharan Africa and in the Global South have faced…. More than 20 years ago, I attended a WTO ministerial meeting in Doha, Qatar, where, due to international outcry over deadly inequalities in access to AIDS treatment in Sub-L In Saharan Africa, Bush administration trade negotiators, over petulant objections from Big Pharma, have actually put public health first. This resulted in a historic statement. Unfortunately, the WTO, President Biden and other high-income minority countries are standing in the way of what should be a very reasonable outcome at the ministerial conference. The world is watching. We hope that developing countries will once again take the lead and move away from the poison pill of the text.

Robert Weissman, President, Public Citizen: “As historians look back on this period, there will be a lot of judgment for rich countries and Big Pharma, but it may well be that the harshest judgment of all will be reserved for the World Trade Organization which was to do the less to make an impact. In a pandemic that happens only once in a hundred years, killing millions, it could and could not waive its rules protecting the monopolies of Big Pharma. C That was all we were asking for –– it wasn’t about giving money or transferring technology or going into the field to save lives. , written by Big Pharma to protect their monopolies, during a pandemic that only happens once in a hundred years. And the institution failed. I’m confident we won’t get the negative waiver, counter- productive, so-called “compromise”. I echo the calls made to countries to move away from it. nt. I implore my government, the United States, to step in and try to salvage a positive waiver. Assuming that doesn’t happen, the US government shouldn’t get away with it. The US government should say immediately that it will not pressure countries not to try to access vaccines and testing and treatment technologies. The U.S. government should positively assist in the transfer of technologies that it controls – and that U.S.-based companies control – so that countries, especially poor countries, can access treatment technologies, testing and the ability to manufacture vaccines.

Lori Wallach, Rethinking Commerce: “The WTO ministerial meeting is a failure before it begins and the limited legitimacy and relevance of the WTO is being drained by the reality that two years after the start of the worst global health crisis in a generation, 15 million deaths and millions more thrown into poverty, the WTO is not even discussing removing intellectual property barriers to global access to needed COVID-19 vaccines, treatments and tests. Early action by the WTO could have saved millions of lives and a waiver could still save millions by stopping the massive epidemics that generate the deadliest new variants. Instead, the world is left with a shameful choice between bad text pushed by WTO staff that won’t increase access to COVID vaccines, doesn’t even cover treatments or texts, and would limit more existing WTO flexibilities for access to medicines, and no text at all. Although 65 countries co-sponsored South Africa and India’s TRIPS waiver text and more than 100 support a waiver at the WTO and only the EU, UK and Switzerland oppose it on behalf of the pharmaceutical profession, the WTO negotiations were never launched on the removal of the obstacles to the intellectual property of the WTO. Instead, WTO staff have generated EU-only rump text that relies on existing WTO compulsory licensing procedures that have proven deeply inadequate during COVID. In the name of trying to salvage the chaotic reputation of the WTO rather than focusing on saving lives, WTO staff are now using harsh intimidation tactics to try to get bad text through. We support calls from civil society groups in Africa, Asia and Latin America urging their governments to reject the text. Going forward, efforts can only intensify in scope and tactics if the WTO legal mechanism designed for such an emergency fails. No one is giving up or leaving because it is not possible to do so with tens of millions of lives and livelihoods at stake.”