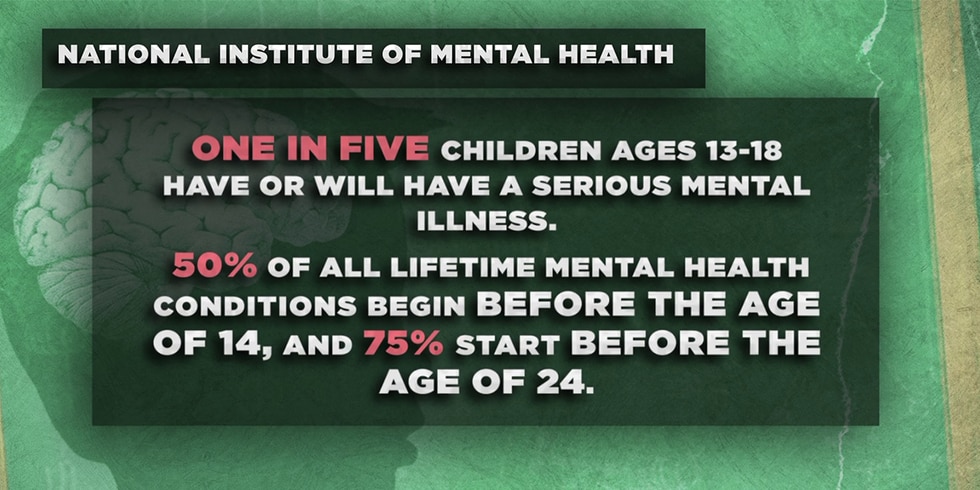 JACKSON, Miss. (WLBT) – Mental illness continues to afflict teens across the country, including here in Mississippi.

An estimated 27,000 Mississippians between the ages of 12 and 17 suffer from depression.

According to the National Alliance on Mental Illness, many of these young people have not received any care in the past year.

Wendy Bailey is executive director of the Mississippi Department of Mental Health. She says some young people never get the help they need, so she and her team are working to change that. According to the National Institute of Mental Health, one in five children between the ages of 13 and 18 will have serious mental illness.

“Statistics show that around 50% of all mental health problems start before age 14 and 75% start before age 24,” Bailey said. “That’s why it’s important to focus on early intervention as well as prevention efforts.”

Mental Health Awareness Facilitator Christiane Williams is the coordinator of Lead by example organization that provides mental health education and training statewide. She says it will take everyone working together to break the mental health stigma to help young people like Calvin Berry.

Berry is one of two teenagers arrested in connection with a shooting at the Mississippi Mudbug Festival last week.

His grandmother told 3 Your Side that her grandson’s late father tried to give him emotional help after he was first arrested.

Williams says it’s not too late to ask him for help behind bars.

“It’s going to start with the officers there, making sure he gets the medical, psychological and educational care,” Williams says. “What he would have gotten on the outside, unfortunately, has to be on the inside, so when he’s released he can return to a conducive environment.”