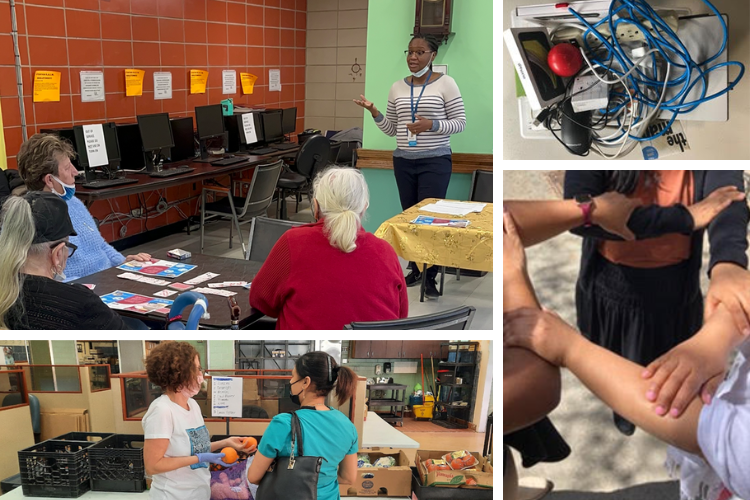 “Our main question since the fall has been: what is the connection between communities of color and the medical system? And, of course, there is a lot to be said,” Capotescu said. “There is a sense that trust in the medical system, in science, in state institutions and in democracy is in crisis. Through various forums and conversations at the community level, we have partnered with Bronx Community Health Networka supplier in the Bronx, and other community partners.”

What is a Community Health Worker?

Capotescu: It is a group of people who work between the medical profession and patient communities. They facilitate and broker knowledge transfer and relationships between hospitals, doctors, nurses and patients who use these services.

They are also involved in many other community services like transportation, food provision, food stamps, access to technology, access to government services. They have a variety of tasks to perform and they endow communities with knowledge about them.

Tomson: We often think of information and health care as institutions or places where you go to receive services. I think the interesting thing we’ve observed about CHWs is that they provide continuity of care, not just within the medical system but within other welfare and welfare systems, that it’s food stamps, garbage collection or neighborhood nutrition. All kinds of stuff about health care that we don’t think about because it’s not in a hospital. It’s not just a place you go, it’s someone you’ve known for years or have an ongoing face-to-face and in-person relationship.

What is the object of the exhibition?

Capotescu: This exhibition is dedicated to CSAs and their stories. He tries to capture stories through their eyes about what their work entails and what it’s like to work at the intersection of these institutions, communities and spheres of society.

We will have an opening night on June 14 and it will continue through the end of July at the Forum on the Manhattanville campus and we invite stakeholders from different levels of community, politics, academia and journalism to have a moment of exchange and commitment.

We want people to have an unlikely conversation about some of the shortcomings of the medical system and some of the issues CHWs overcome in the work, so we can convince people to make a difference, get more funding, support, better training and visibility…so that CHWs are not treated as an institutional afterthought.

What is the PhotoVoice technique?

Capotescu: We use a very vague method called PhotoVoice. Essentially, PhotoVoice is a photo taken at a time or situation that depicts a certain relationship from the perspective of those who took the photo. It is accompanied by text that provides texture and context to make the subject of the image tangible. It’s a bit like a photo report.

We organized a series of workshops with the CHWs. The first session was a training session, where we explained the PhotoVoice method and what the project was about. In the second session, we collected the material they produced and discussed it as a group. There’s a bit of guidance from our side during the process as they polish their stories. We have done this now with 60 CHWs. Many of them come from almost all over New York.

Read the stories of three community health workers below and be sure to stop by the exhibit starting June 14 at The Forum, 601 W 125th St.