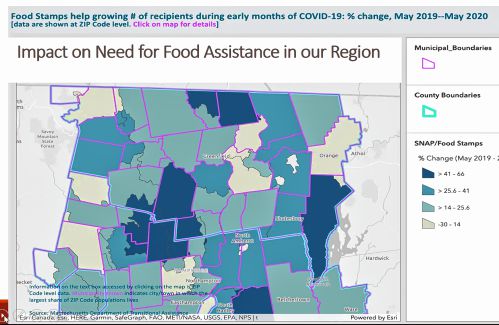 GREENFIELD – The Franklin Regional Council of Governments on Wednesday outlined its priorities for the coming years with an update on the Community Health Improvement Plan (CHIP), which focuses on Franklin County and the North Quabbin.

This year marks the second year of the CHIP program, and the council remains focused on its original goals centering on the three community health indicators of type 2 diabetes, anxiety and depression, and substance use among youth.

“A year later, we’ve learned a lot,” said Phoebe Walker, director of community services at FRCOG. “We still have the same goals that are still tied to the three health indicators.”

A working group is appointed for each health indicator. The indicators serve as a point of context for each working group to focus on as they develop plans to keep the community healthy.

FRCOG works with cities to develop green space and recreation plans and with food security organizations to encourage residents to adopt active and healthy lifestyles.

This working group focuses on the physical environment of cities and what can be done to encourage people to get outside and exercise. Rachel Stoler, who co-chairs the Type 2 Diabetes Task Force, said Colrain has developed a Complete Streets grant plan and FRCOG is trying to identify other cities where this is happening.

A second focus was on the Supplemental Nutrition Assistance Program (SNAP) and Health Incentive Program (HIP), which can help low-income people access healthy foods. Stoler said HIP access is one of the task force’s top priorities in the coming year.

“Franklin County is one of the places that use it the most,” McClintock said. “Currently, only 12-13% of SNAP users in Franklin County use their HIP benefits.”

As many people are still adjusting to ever-increasing screen time due to the COVID-19 pandemic, the CHIP program is focused on building social and community connections.

“We’re just going to have to deal with the fact that this is one of those things that causes anxiety and depression,” said Timothy Ranney-Blake, co-chair of this task force. “Because we can’t meet in person and we’re limited, those are things that continue to weigh on us.”

“We want to strengthen our connections with local partners and resources that already support people with mental health issues,” Audley said. “Especially places that rely on social connections.”

Meanwhile, FRCOG is partnering with the Communities That Care Coalition task forces to work on youth drug prevention.

The main goal, said group co-chair Jennifer Webster, is to try to involve children and young people in the process, which often “doesn’t necessarily happen”.

Webster and its co-chair Ricia Elwell-Socci appealed to community members and organizations to join them in their mission. Interested persons can fill out this Google form: bit.ly/3Hta79Y.

Attendees highlighted the need for accessible housing and shelter in Franklin County and the North Quabbin area. Another high priority need identified was mental health support, as well as better access to general health care.

“One of the biggest problems in this region,” Walker said, “is access to health care.”

For more information about CHIP and the three working groups, visit frcog.org/chip.